ABOUT The SPRG Series


What if you could hear the thoughts in other people’s heads…
even the thoughts of those who are already dead?

When college freshman Samantha Davidson moves to a new country, enrolls in a new university, and joins a small student org called the SPRG, all she really wants is to blend in. And maybe find some answers as to why she hears the things she does.
But instead of answers she finds more questions, and instead of blending in she realizes she has unintentionally made the strangest friends—and even wonders if she has fallen in love.
Worse of all, instead of losing her ability to hear people’s thoughts, she finds the voices getting disturbingly louder, saying things that prove to be more chillingly accurate… and terrifying her in ways that could only be described as demonic.
This is the stage on which other paranormal things happen in Voices In The Theater, the first book in a young adult paranormal trilogy under the SPRG (Student Paranormal Research Group).
This 3-book fiction series follows the development of Samantha’s psychic abilities throughout her first three years in a major university in Manila: 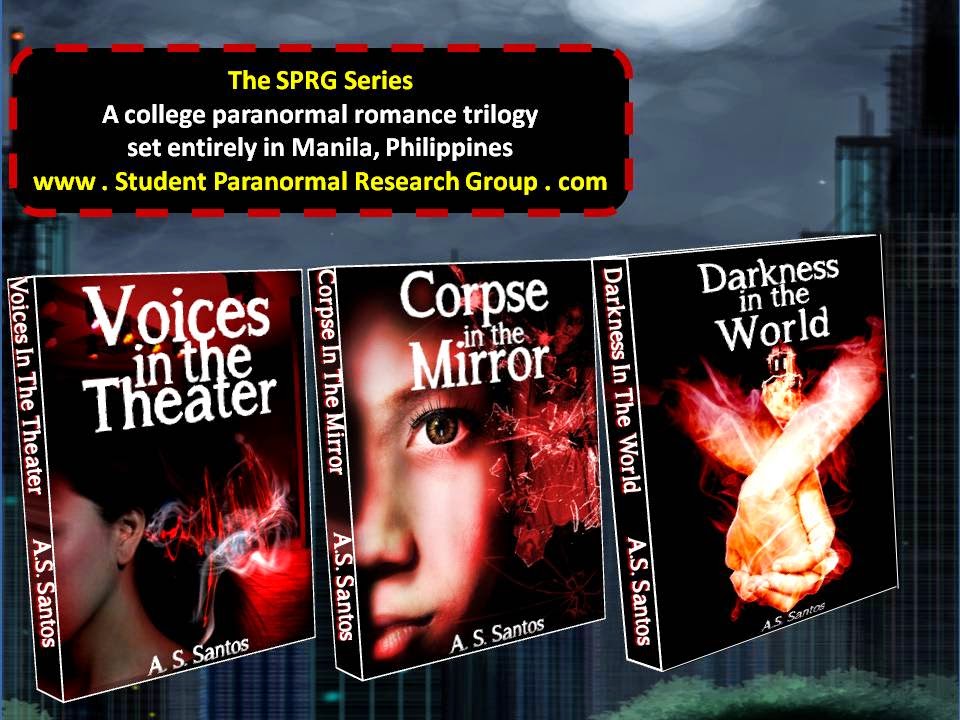 In Voices In The Theater she comes to terms with her being able to “hear things,” and finds that she actually needs this ability so she can protect the people she cares about.


In Corpse In The Mirror Sam realizes she can now “see things” as well, and sees disturbing images of herself through the eyes of a murderer. Finally,


In Darkness In The World Sam and her friends in the SPRG realize the bigger picture of their involvement in the paranormal, and find themselves facing what they never thought they’d see in their lifetimes: a catastrophic event that will change the world.

The SPRG Series is written by A.S. Santos, who has professionally written for television and magazines, and conducts creative writing workshops for teens and young professionals.

A.S. Santos has also personally experienced various paranormal phenomena, and a number of situations mentioned in the SPRG Series are based on actual events.