A.S.Santos Finishes Book 3 of the SPRG Trilogy (Titled "Darkness in the World") During NaNoWriMo 2014

Although A.S.Santos finished the chapter outline of "Darkness in the World" in April 2014 (and even had the idea for the whole SPRG arc in 2010), the author used the NaNoWriMo fever to actually finish the last book of the Student Paranormal Research Group this November.

This is why "Darkness in the World" is coming out in digital format this December 2014 on Amazon, iTunes, Kobo, and GooglePlay, published by Flipreads.com. :-)


"Darkness in the World" Sample Chapters 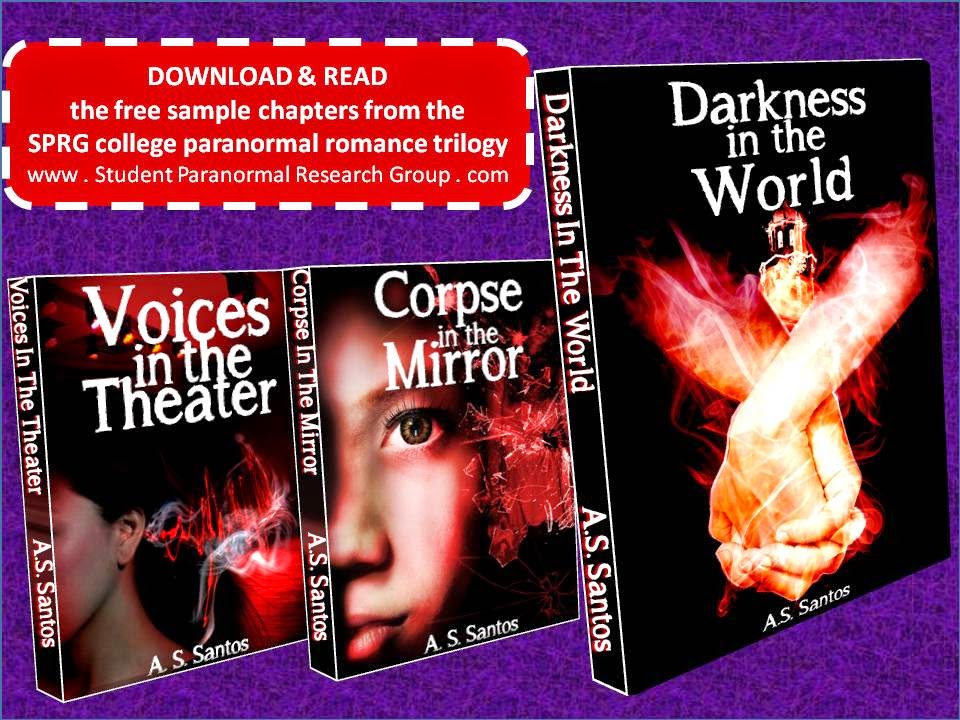 Posted by Unknown at 7:21 PM No comments:


Teachers who assign "book reviews" or "book reports" to their students can start considering using the SPRG Trilogy in their discussions... for 3 very good reasons.

Posted by Unknown at 5:30 PM No comments:

One of these “complicated” issues involves "Keeping Secrets" (mentioned in Book 1: Voices In The Theater, particularly in Chapters 7 and 17), so let’s talk a bit more about that here.

The Reason We Keep Secrets

While we have many reasons for keeping secrets--and we human beings have a wide array of secrets we often want to keep--the one common thing that makes us keep these secrets is fear.

Some experts say that people’s greatest fear is not death, or suffering, or even public speaking.

Instead, people's greatest fears are "humiliation" and "being judged by other people."

And if we're really honest with ourselves, one of those two things is always at the heart of why we keep something a secret.

Maybe the secret we're not telling is something we're not really ashamed of.

But most likely it's something that we're not sure how other people will react to; most likely, our guess is that they're not going to react in a way that will make us feel better. 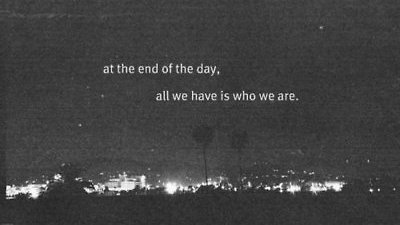 In the book "Voices In The Theater," Sam not only keeps her abilities a secret; she also keeps certain things about her past to herself: her fears, her pains, her regrets.

In the story, sharing these secrets with someone she trusted turned out to be very helpful for her, because it got her to thinking about how to be more active in directing her future, instead of just dwelling on her past.

She also realized the huge toll that keeping secrets had on her, psychologically and emotionally. She hadn't been able to discover much about who she really was, because she was too busy burying parts of herself that in the end needed to be revealed in order to heal.

You can tell when a secret you are keeping is something you already need to tell someone about: they eat you up inside, and keep you from enjoying more authenticity as a person and more honesty in your relationships. They keep your world small, and keep your fears big.

If and when you do decide to share your secrets, make sure it's with someone trustworthy; someone that other people like yourself trust, too.

Meanwhile, here are some resources online that you can benefit from as you're deciding about what to do with the secrets in your life (just click on the highlighted "titles" -- these links will open up a new tab when you click on them):

SPRG Series Author A.S.Santos Interviewed by Saksi on GMA 7 About Dark Tourism in the Philippines

This time the interview focused on Dark Tourism and Paranormal Tourism, and was featured in the Halloween 2014 Special of the TV program Saksi.

Information You Need About The SPRG Series

Not sure where to start?

Here are the quick links to help you get what you need to know:

Posted by Unknown at 4:30 PM No comments:

The True Story Behind "The Exorcist"

The fictional movie "The Exorcist" was shown in the 1970s,
but is actually based on the true story of a possessed boy
in the 1940s.

(Note: If you can't see the video screen shots and/or you're
getting the message that "This video may be inappropriate,"
it simply means you have your Safety Mode turned On.

Unfortunately, YouTube requires that you change your
Safety Mode settings to Off in order to watch these videos.

So just choose "Off" for now, and just turn your Safety back
"On" later. )

Posted by Unknown at 3:00 PM No comments:

Is It Really Just An Imaginary Friend?


In many horror/suspense movies and stories, we'd often find among the characters a child who has an imaginary friend that later turns out to be "something else."

The thing about this is: This doesn't only happen in fiction.

Does your child -- or the child of someone you know -- simply have an imaginary friend?

Or should you start paying attention?

Here are some telltale signs... 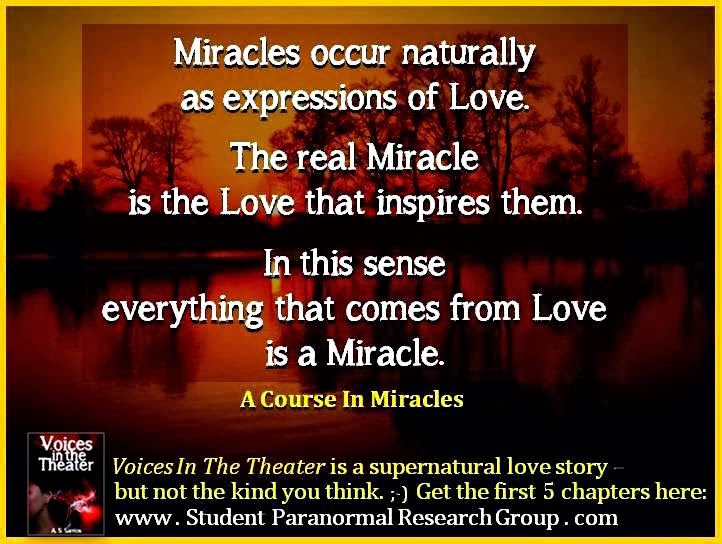 Courage Is A Decision 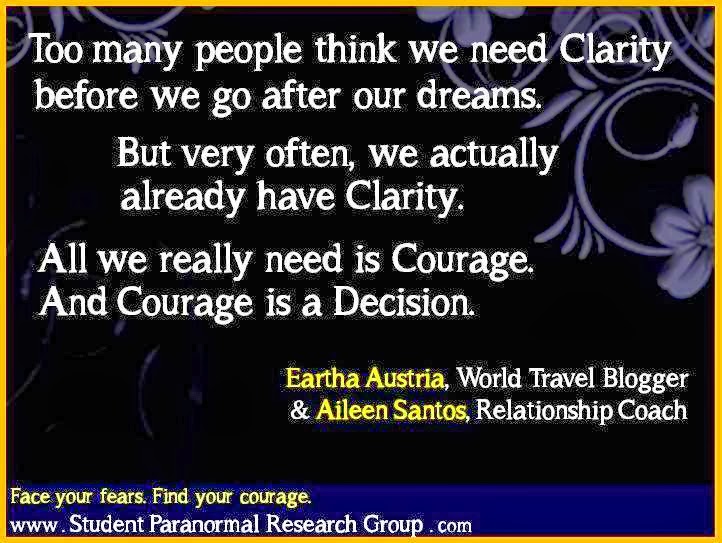 There Is Beauty In Shadows 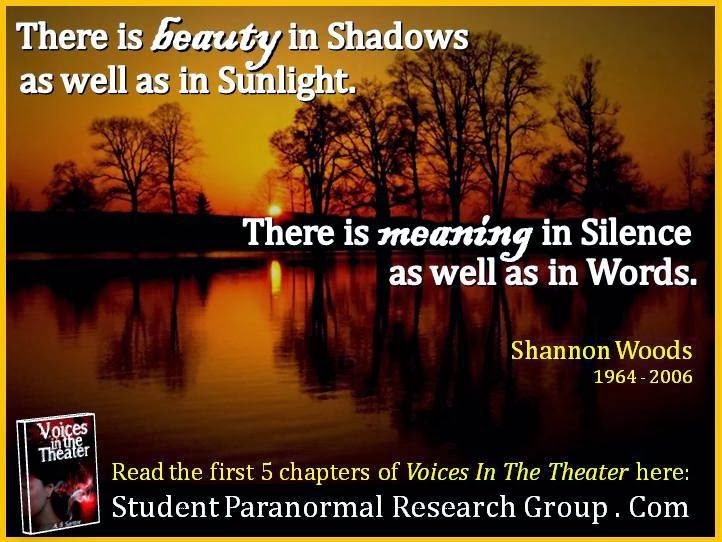 
My kid's Catholic school is over 100 years old. There is a basement under the gym that's used for storage.

I was subbing once, and during recess one of the kick balls goes down the stairs.

A little girl was standing at the top of the stairs yelling, "Just throw it up to me."

I went over and asked who she was talking to, and she replied:

"That big man down the stairs."

I went down and there was nobody down there, and it was the only way in.

I asked some of the other kids if they have seen the man before, and they said, "Yes, but Sister told us not to talk to him."

I asked them to describe "Sister," and they described a nun.

There haven't been nuns at the school in 40 years.


From Tickld:
http://www.tickld.com/x/when-you-see-what-these-kids-said-youll-want-to-run-number-5-is-bone-chilling
Posted by Unknown at 10:01 PM No comments:

Have You Experienced A Ghostly School Encounter?

Either way, it's still there in your memory: your own school ghost story. 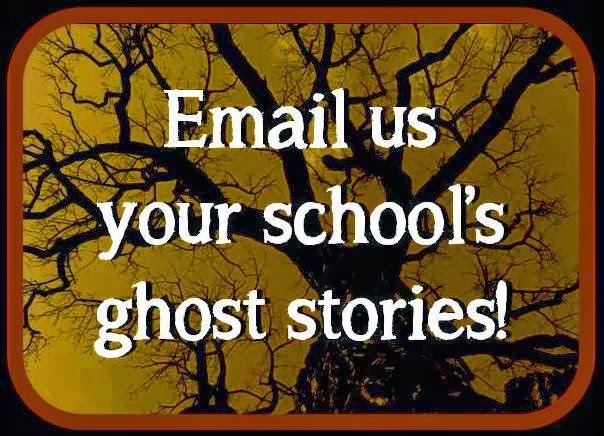 Click here to put a form like this on your site.
Posted by Unknown at 7:23 PM No comments:

Courage Is Not The Absence Of Fear 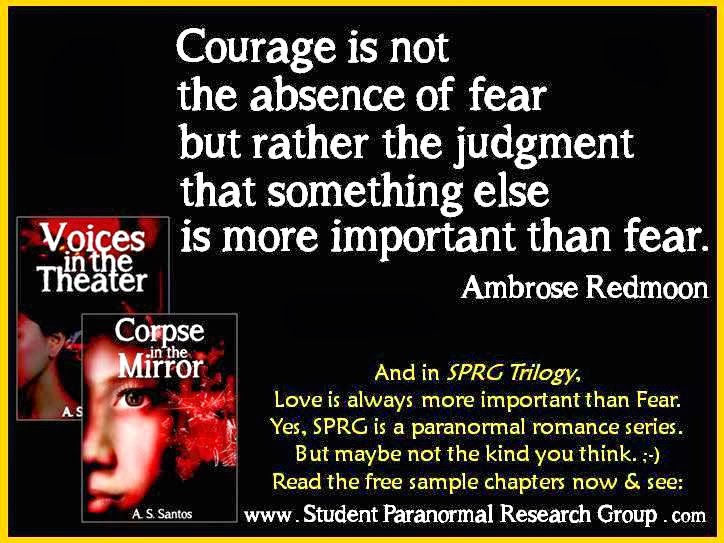 Posted by Unknown at 4:30 PM No comments:

What The Dead Can Teach Us About Living

Top 3 Things About The Paranormal
(That Give Us Insights On How To LIVE) from A.S. Santos
Posted by Unknown at 4:30 PM No comments:

Could The Ouija Board Help You Find True Love? 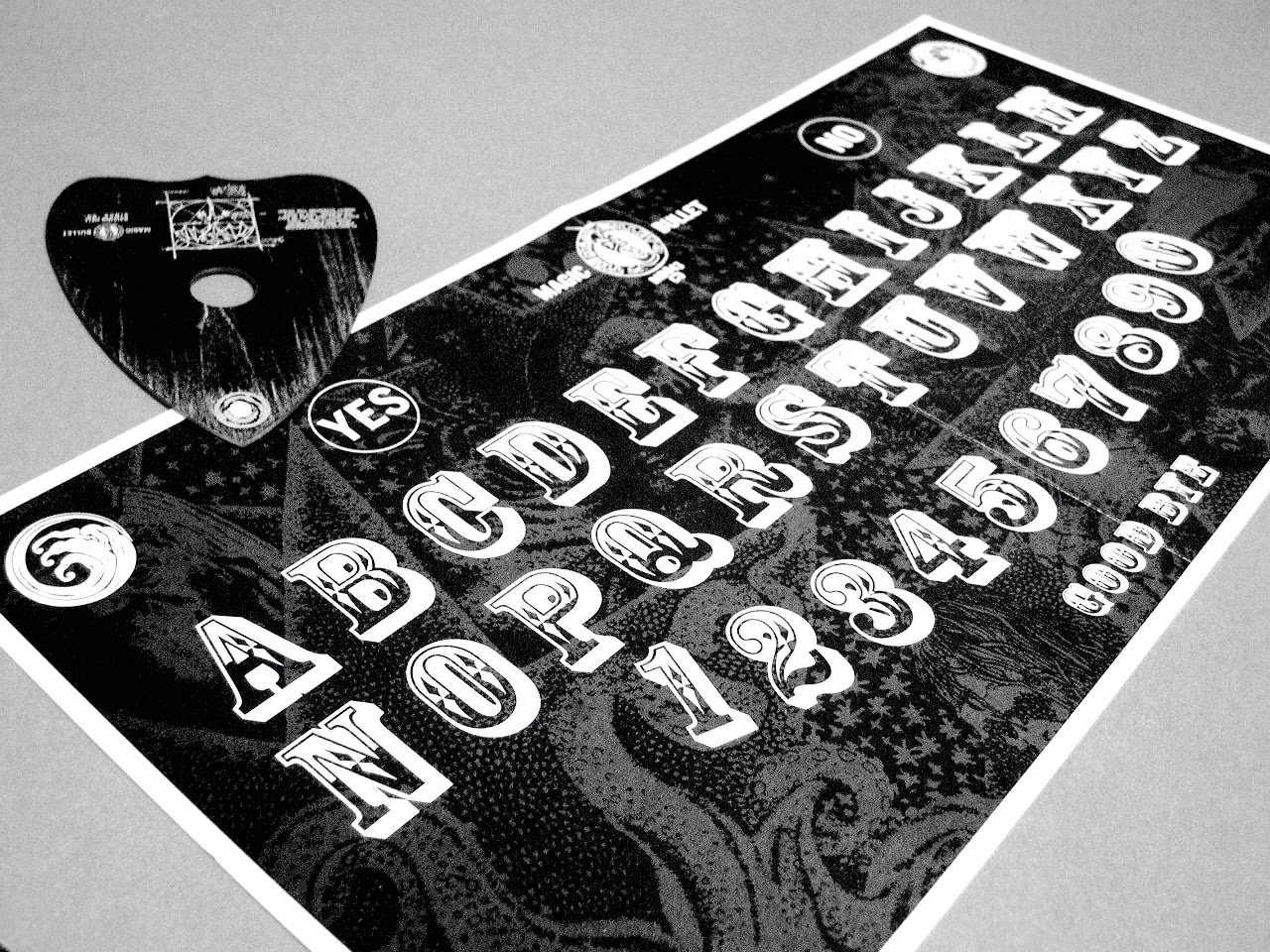 By day, Aileen Santos is known as “The Relationship Coach,” with a number of her past clients now finding and growing loving relationships of their own.

But by night—well, in between coaching & workshop sessions, to be exact—Coach Aileen goes by another name: A.S.Santos, author of the teen paranormal romance series called The SPRG.

Of Love & The Paranormal

SPRG stands for Student Paranormal Research Group, and it is in this novel-based organization that college student Samantha Davidson not only discovers her growing psychic powers, but also becomes involved in a spiritual battle between good and evil.

And yes, she learns a thing or two about love, too.

When asked how she became involved in such diverse fields as love and the paranormal, Santos simply explains that these are “the two most confusing experiences of teenage life.”

In fact, one of Santos’ own early experience of both was when she played the Ouija board in high school, and the spirit she contacted gave her the full name of the man she was supposed to marry.

“At that time, I didn’t know anyone by that name,” recalls Santos, “And I didn’t mention it to anyone. But just a week later a classmate of mine said this guy from another school wanted to meet me… and he had the exact same name that I got from the Ouija board.”

So did she meet this guy in high school, and eventually marry him years later?

Santos smiles. “Actually, I never got to meet him. I was only fifteen then, but I knew that if I met the guy that some ‘spirit’ told me I’d one day marry, then it would be like I had no choice in the matter. That information would always be at the back of my head, and would influence my decisions about him. Which is why I told my classmate, ‘Don’t introduce us, please.’ I figured that if we were meant to be together, then we’ll have another chance to find each other.”

Many years later, Santos is now happily married to the man who gave her the courage to become a relationship coach, “The one who’s shown me that real love happens.” And no, he is not the man from the Ouija board. Instead Santos says, “He is my choice—not some strange spirit’s.”

In fact, this concept of making your own choices is one of the underlying themes throughout the SPRG paranormal romance trilogy, while the Ouija board itself is featured in Corpse in the Mirror, book two of the series. (Ed’s note: Santos’s biggest message about the Ouija board is this: “Do NOT use it.”)

Writing Her Own Future

Santos is a Registered Guidance Counselor with a Master’s Degree in Counseling Psychology, and is a Certified Professional Coach.

She has worked professionally as a magazine writer and editor, as a television scriptwriter, and as a creative writing workshop facilitator, and is a fan of Harry Potter, Buffy the Vampire Slayer, the Mortal Instruments trilogy, and the Hunger Games.

It is in the SPRG series that Santos gets to combine love and the paranormal, in the form of a creatively spooky, three-book story.

Book 1: Voices in the Theater was published by Flipside in 2012, followed by Book 2: Corpse in the Mirror in 2013. Both are now available on Amazon, iTunes, and Kobo.

Santos is currently writing Book 3: Darkness in the World, with a planned release date of Halloween 2014.

For more information on the SPRG Series and to read more about the author, click on the links you need at the left side of this page.

Posted by Unknown at 3:38 AM No comments:

Is It Really Just An Imaginary Friend?


Does your child simply have an imaginary friend?

Or could it be something more sinister that you need to do something about?

Here are four (4) differences between "harmless imaginary friends" and "possible harmful entities" that can help you decide: 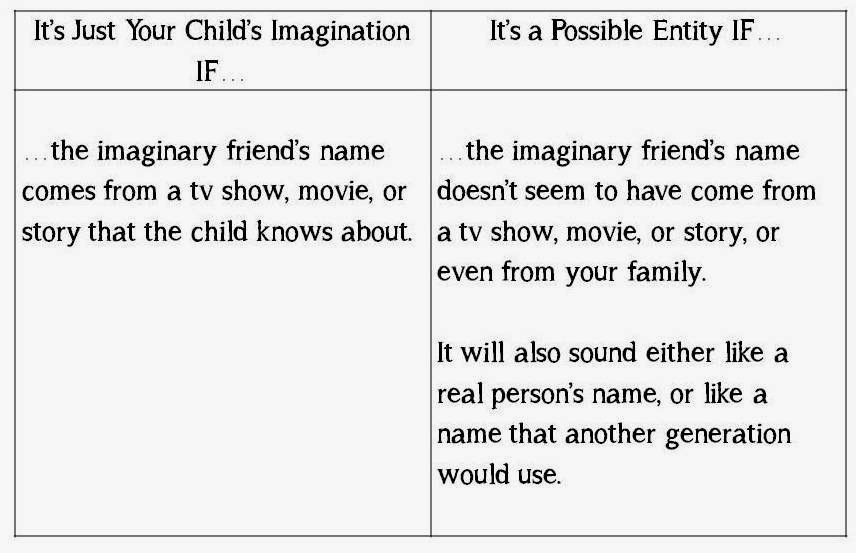 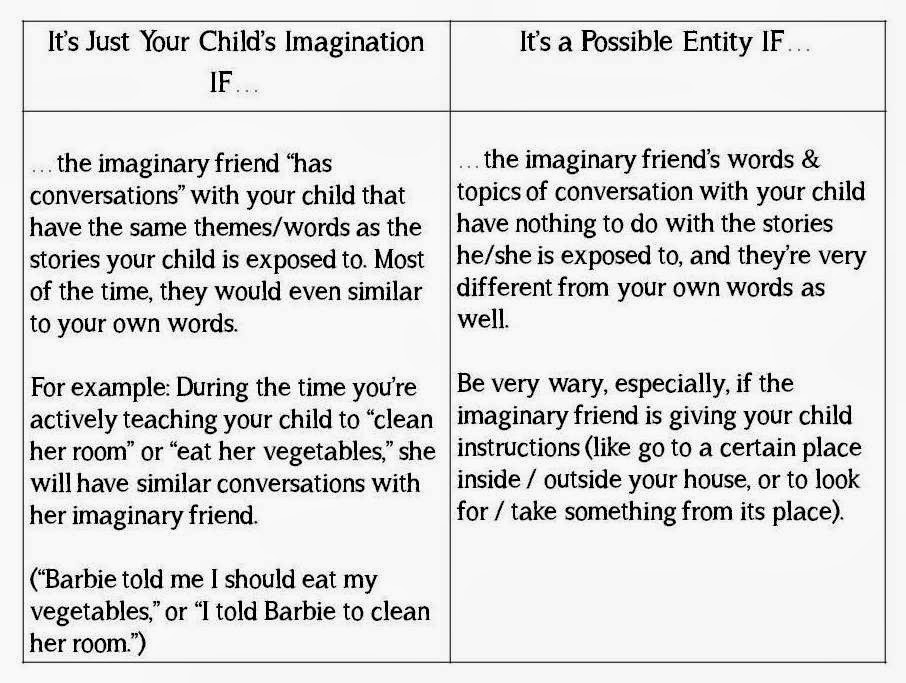 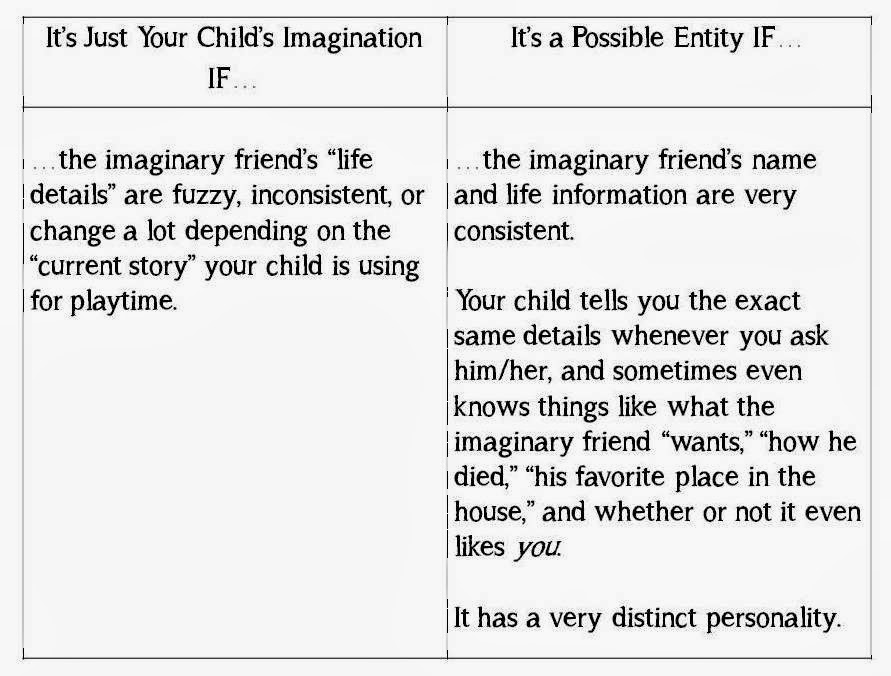 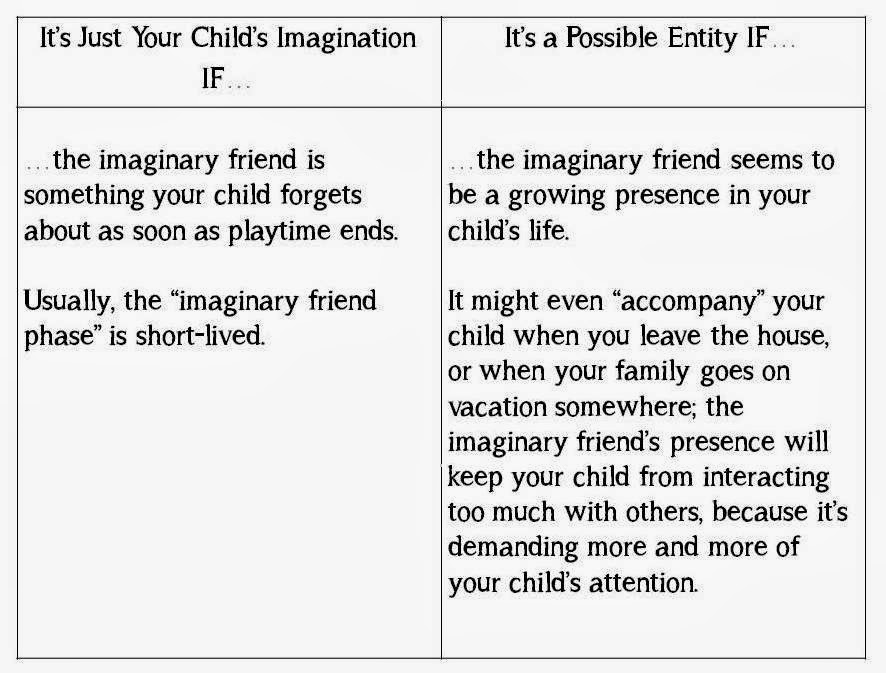 If you feel that your child's "imaginary friend" may be something you need to be concerned about, seek the help of a counselor or a psychologist first to rule out other possibilities / diagnoses, and to create a plan of action for what you can do next.

Posted by Unknown at 6:47 PM No comments:

One Benefit Of Reading Ghost Stories: They Allow Us To Face Our Fears 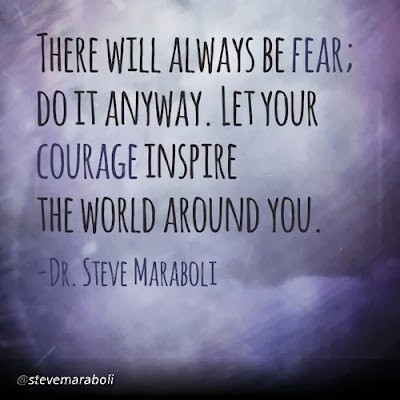 As regular human beings, we encounter a lot of things in life that make us feel afraid.

We fear failure, we fear death, we fear rejection, we fear ridicule, we fear not being good enough.

But whether or not our fears include "ghosts" and the "unknown," one benefit of reading ghost stories is that it helps us -- through fiction, and maybe sometimes fact -- to face something fearful

...and realize that we'll be alright in the end.

Well, maybe not all horror fiction ends on a happy note, but the SPRG series does.

Check out the fr*e chapters and see for yourself:

Posted by Unknown at 7:25 PM No comments: